PARIS, Sept. 6, 2022 /PRNewswire/ -- Global turnover from Fine Art auction sales increased by 8.8% in H1 2022, despite another wave of Covid-19 in China. Artprice counted a record number of auction transactions around the world and observes a growing enthusiasm for works by artists from the second half of the 20th and the beginning of the 21st century, whose prices are highly volatile. 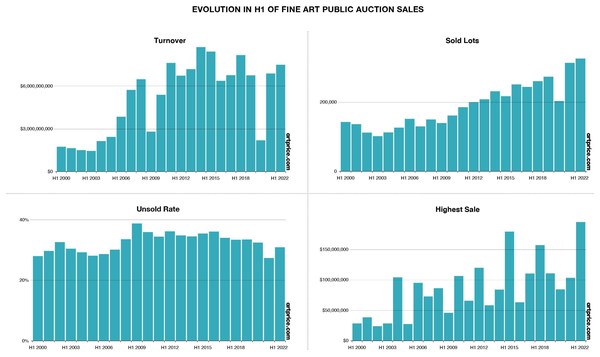 thierry Ehrmann, President, and Founder of Artmarket.com: "A comprehensive study of the results of public auctions reveals growing competition between New York, London, and Hong Kong. This competition is rapidly inflating the prices of works by young artists to levels usually reserved for great masters. On the occasion of the Frieze London and Paris+ fairs (the latter run by Art Basel), Artprice will be publishing an exclusive report dedicated to 'Ultra Contemporary' Art: a term that designates a dynamic that is developing around artists under 40 years old, like Matthew Wong, Avery Singer, and Refik Anadol.

The analysis of the Art Market presented in this H1 2022 Report is based on the Fine Art public auction results recorded by Artprice and only concerns paintings, sculptures, drawings, photographs, prints, videos, installations, tapestries as well as NFTs, and excludes antiquities, anonymous cultural property, and furniture. All prices indicated in this Report refer to public auction results, including buyers' fees, and the $ sign refers to the US dollar.

ORGANIZATION AND STRUCTURE OF THE ART MARKET

As the health crisis wanes worldwide, Fine Art auctions settled down to an unsold rate of  31%, almost one in three works offered for sale. This level corresponds to a stable average over the last twenty years, fluctuating between 36% in 2009 and 27% in 2021. Indeed, this key market indicator has reacted quite differently compared with how it reacted in the last major crisis that affected the global art market, the 2009 financial crisis. Back then, collectors decided to take less financial risk, whereas the health crisis of 2021 prompted buyers to switch to a new entirely dematerialized sales channel.

In the first half of 2022, the market found a new balance thanks to the coexistence of two different and complementary sales channels (one physical, the other digital), which allowed auction transactions to continue at a healthy pace reaching a historic number of 326,000 Fine Art lots in six months. In H1 2022 this volume further increased to an unprecedented intensity, despite the postponement of many auctions in China (whose turnover volume is down 53%) due to an additional wave of Covid-19.

France continued to grow (+14%) consolidating its 4th place ahead of Germany (-5%) after a sensational performance in 2021. In addition to the presence of Christie's and Sotheby's, several Parisian auction operators posted exceptionally strong performances: Artcurial (+42%) and Aguttes (+154%), among others. Meanwhile, The French capital is attracting a growing number of major international players like David Zwirner, while the Gagosian and Continua galleries have opened new spaces in France. Paris is delighted to see the upcoming arrival of Hauser & Wirth as well as the opening of a Phillips auction room. Bonhams has acquired the French house Cornette de Saint-Cyr (operating in Paris and Brussels). Lastly, the Art Basel company will henceforth be the official organizer of the international autumn art fair organized at the Grand Palais in Paris, entitled Paris+, which will replace the FIAC.

Japan and Switzerland also had an excellent start to 2022 with increases of 74% and 145% in their respective auction turnover totals. Without directly competing with Hong Kong (which still weighs seven times more), Tokyo is positioning itself on the Asian continent as a hub for major contemporary artists, including Andy Warhol, Yoshitomo Nara, Yayoi Kusama, but also young talents like Mr Doodle and Ayako Rokkaku (born in 1982), whose auction sales have already exceeded $18.6 million this year. For its part, Switzerland is continuing to carve out a place for itself in the Post-Impressionist and Modern Art market, with sales of important works by Ferdinand Hodler, Alberto Giacometti, and Marc Chagall. 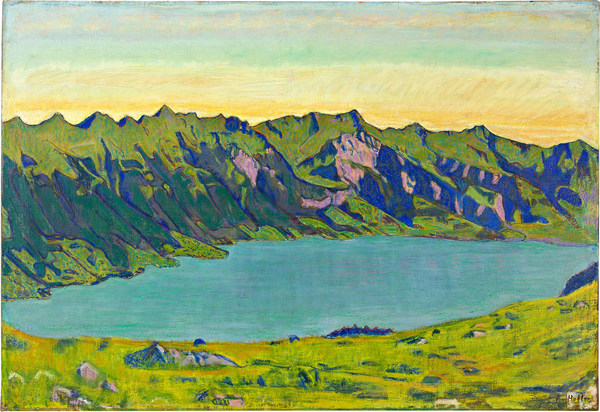 Propelled to center stage in March 2021 with a first public auction result at $69.4 million, NFTs (non-fungible tokens) have created something of a revolution in the art market, with a new type of work, new collectors, and a new currency.

The 104 CryptoPunks that Sotheby's announced in February 2022 were finally withdrawn on the eve of their scheduled sale. The withdrawal of such a lot, estimated between $20 and $30 million, underscores the extent to which NFT market players remain somewhat skeptical about the service provided by traditional intermediaries. Not only are they expensive (transaction costs amount to an average of 20% compared with around 2% to 3% via NFT platforms) but they also are governed by a much less flexible schedule. The major auction houses are nevertheless continuing their efforts to participate in this emerging market, although they only very rarely sell major NFT collections (BAYC, WoW, etc.). For the time being, such projects no longer seem to need the marketing efforts or the legitimacy of regulated auction houses.

At the same time, the volatility of cryptocurrencies, has exacerbated the mistrust of traditional collectors vis-à-vis this disruptive market. Fortunately, this lull will provide a good number of artists, dealers, collectors, and institutions – starting with museums – an opportunity to take an interest in digital works and to consider acquiring NFTs without the pressure of record sales and over-mediatization.

The NFT phenomenon stems from the same enthusiasm that Artprice is observing for the work of young artists, some of whom are eliciting record multi-million dollar results even before their work has been exhibited in a major museum or before they have even enjoyed a solo show in a gallery. The recent auction records for works by artists under 40 (whose very recent works are already trading on the secondary market) will be analyzed by the next Artprice Ultra Contemporary Art Report to be published in October 2022. This will notably be an opportunity to highlight the growing success and influence of young female painters.

Andy Warhol's Shot Sage Blue Marilyn elicited the second highest ever art auction bid. For the first time since Leonardo Da Vinci's Salvator Mundi in November 2017 (four and a half years ago), the ultra-high-end market is back with a result that once again questions the notion of an absolute masterpiece and its value. The charity sale that produced this result was guaranteed by Christie's and ended with a result of $195 million (including fees). The 'painting' was acquired by Larry Gagosian himself, the powerful gallery owner who had already sold the canvas to Thomas Ammann in the early 1980s.

The French auction house Artcurial had the honor of presenting an exceptional still-life by Jean-Baptiste Chardin, Le panier de fraises des bois, painted in 1761 and exhibited the same year at the Grand Salon in Paris. While this was the first appearance of this painting at auction, art expert Eric Turquin insists on the immense historical importance of the work, importance to which the labels on the back of the painting attest, having been included in many prestigious exhibitions around the world. A gentle and magic painting, the Jean-Baptiste Chardin masterpiece was estimated between $13 and $16 million and finally sold for $26.8 million.

The biggest sensation of the year was undoubtedly created by the canvas The Sugar Shack (1976) by Ernie Barnes (1938 - 2009). Last year, the African-American painter set a new auction record at $550,000. But on 12 May this year, Christie's proposed his painting The Sugar Shack (1976) in New York with an estimate of $150,000 - $200,000. The work finally sold for $15,275,000, more than 100 times the low estimate. In the days and weeks that followed, six more important Ernie Barnes paintings were offered at Christie's and Bonhams, and they all sold well beyond their estimates.

Last year, the Japanese artist Yayoi Kusama became the first female artist to enter the world's Top 10 performing artists as calculated by Artprice (all periods of creation combined). She was also the third best performing living artist of the year behind Gerhard Richter and Banksy. This year, Yayoi Kusama has repeated that performance with 208 lots sold worldwide for more than $115 million. She also set a new auction record when her Untitled (Nets) (1959) reached $10.5 million at Phillips on 18 May 2022.

Matthew Wong would have been 38 if he hadn't taken his own life in 2019. Since his death, his paintings have enjoyed stunning success in auction rooms. On 19 May 2022, his Night Watcher (2018) was acquired for $5.9 million at Christie's New York. In H1 2022, Matthew Wong ranked 52nd in the global ranking of artists by auction turnover (all periods of creation combined), a success that has a certain Basquiat flavor to it, even if Wong's place in art history has not yet been recognized.

The information and econometric studies produced by Artmarket.com are presented uniquely for the purpose of analyzing and understanding the statistical realities of the art market and should in no way be considered as advice or a suggestion or a solicitation to invest in the art market.

Don't hesitate to contact our Econometrics Department for your requirements regarding statistics and personalized studies: econometrics@artprice.com

Discover Artmarket and its Artprice department on video: www.artprice.com/video

See certified biography in Who's who ©:
Biographie_thierry_Ehrmann_2022_WhosWhoInFrance.pdf

Artmarket is a global player in the Art Market with, among other structures, its Artprice department, world leader in the accumulation, management and exploitation of historical and current art market information in databanks containing over 30 million indices and auction results, covering more than 787,000 artists.

Artprice by Artmarket, the world leader in information on the art market, has set itself the ambition through its Global Standardized Marketplace to be the world's leading Fine Art NFT platform.

Artprice Images® allows unlimited access to the largest Art Market image bank in the world: no less than 180 million digital images of photographs or engraved reproductions of artworks from 1700 to the present day, commented by our art historians.

Artmarket with its Artprice department accumulates data on a permanent basis from 6300 Auction Houses and produces key Art Market information for the main press and media agencies (7,200 publications). Its 5.4 million ('members log in'+social media) users have access to ads posted by other members, a network that today represents the leading Global Standardized Marketplace® to buy and sell artworks at a fixed or bid price (auctions regulated by paragraphs 2 and 3 of Article L 321.3 of France's Commercial Code).

Artmarket with its Artprice department, has been awarded the State label "Innovative Company" by the Public Investment Bank (BPI) (for the second time in November 2018 for a new period of 3 years) which is supporting the company in its project to consolidate its position as a global player in the market art.

Index of press releases posted by Artmarket with its Artprice department:
serveur.serveur.com/Press_Release/pressreleaseEN.htm

Discover the alchemy and universe of Artmarket and its artprice department https://www.artprice.com/video headquartered at the famous Organe Contemporary Art Museum "The Abode of Chaos" (dixit The New York Times): https://issuu.com/demeureduchaos/docs/demeureduchaos-abodeofchaos-opus-ix-1999-2013

Enabling the Digital Literacy Generation for a Str...